On December 19, 2019, the Seminary hosted a special gathering to celebrate the Feast Day of Saint Nicholas the Wonderworker. 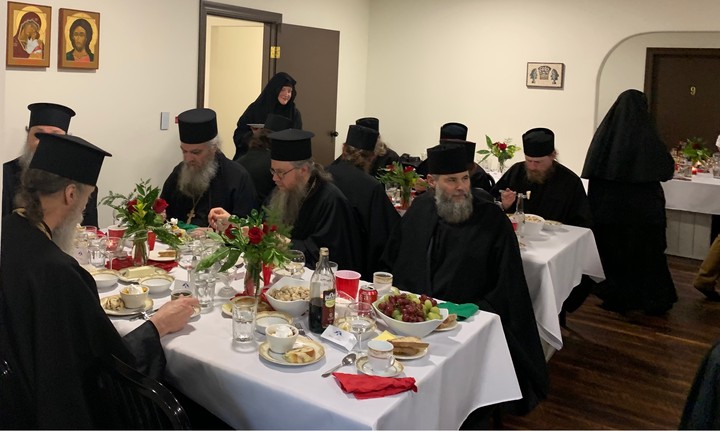 On Thursday, December 19, 2019, the Saint Photios Orthodox Theological Seminary hosted a special gathering for the Orthodox Christian community of Scott Valley and for local friends of the Seminary to celebrate the Feast Day of Saint Nicholas the Wonderworker.

Under the guidance of the Very Reverend Hegumen Father Akakios, who oversees ministry formation at the Seminary, the celebration began in the auditorium with a performance by the student body. Seminarian Timothy Granger opened with a talk about the life of Saint Nicholas and his enduring significance for Orthodox Christians. This was followed by the student choir singing a number of traditional hymns and carols; the choir consisted of Kira Rapp, Teodora Munteanu, Aliya Molinari, and Julie Ling, who were joined by Alexei Bushunow, a devoted supporter of the Seminary. Interspersed with the choral singing were several pieces played on the hammered dulcimer by seminarian Uriah Lantzer.

After the student performance, a formal banquet was held in the dining hall. A delicious fasting meal was prepared and served by the students of the Saint Photios Orthodox Theological Seminary and by the nuns of the Convent of Saint Elizabeth the Grand Duchess of Russia.

Following this festal luncheon, the participants gathered again in the auditorium to exchange gifts, as Orthodox Christians traditionally do in honor of Saint Nicholas, who is renowned for his tremendous charity. The Most Reverend Bishop Auxentios of Etna and Portland, Rector of the Seminary, then concluded the celebration by giving a slideshow presentation of his recent pilgrimage to Romania and Greece.

The many visitors and guests invited to the celebration were deeply edified by and thoroughly enjoyed the day’s events.